Individuals in the Interfaces program are awarded up to a two-year fellowship to cover didactic training and access to opportunities including multidisciplinary faculty membership, professional development workshops, networking opportunities, and funding for travel and training materials. Following the first two years, scholars are funded by their thesis lab.

Coursework includes both 18 months of preclinical medical school courses in Perelman School of Medicine and imaging sciences courses in University of Pennsylvania School of Engineering and Applied Sciences.

The Interfaces program offers two different tracks for imaging sciences courses to match the growing application of data science in imaging: 1) imaging physics and analysis and 2) applied data science. These core courses are taken concurrently with preclinical courses to integrate quantitative and technical training. Below is a bare bone schedule of the medical school courses in addition to the core imaging science courses for the first two years. Please note that the core imaging science courses are dependent on the different tracks. All of these courses help to meet some of the requirements for the Penn Bioengineering Ph.D. 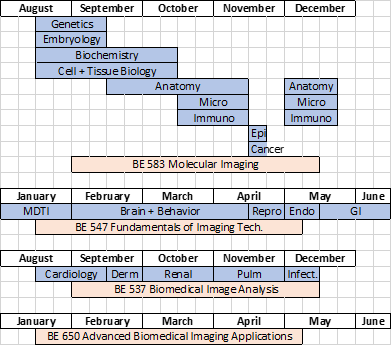 The research journey for trainees begins in the summer of their first year with a research rotation followed by two more research optional research rotations in the spring of the second year. The subsequent summer, summer of the second year, trainees select their PIs and take their qualifying exam. The thesis proposal is then proposed in late third year to early fourth year with at least 8 months before the thesis defense. Despite the delayed schedule compared to compatriots within the department, the median time to graduation remains the same at approximately 5.5 years.